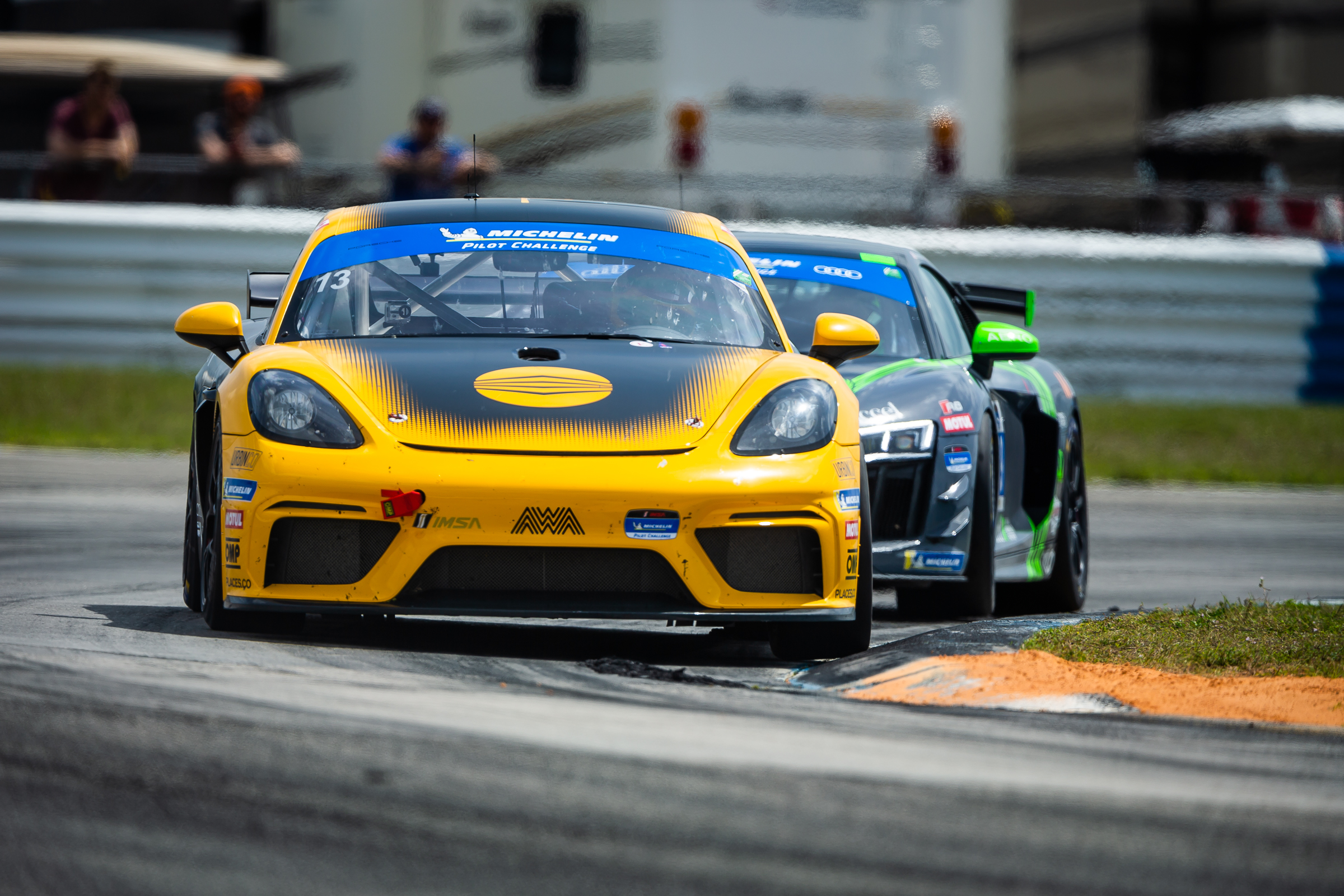 AWA’s two mid-pack finishes to start the 2019 IMSA MICHELIN Pilot Challenge season are most definitely not part of a sophomore slump. It’s more a result of bad luck.

At both Daytona International Speedway in January and Sebring International Raceway in March, flat tires, stemming from contact suffered late in each race, relegated the No. 13 AWA Porsche 718 Cayman GT4 Clubsport to 28th- and 18th-place finishes, respectively, in the Grand Sport (GS) class.

“In these races, anytime you have something like this happen after the final stop, you’re hoping for a yellow to potentially get back in it,” said team owner and engineer Andrew Wojteczko. “But the series is so competitive that if you suffer an incident like that late in the run, you’re really in a difficult spot to try and recover at that point. Early in the run, there’s a lot that can happen in these races.”

As a result, co-drivers Scott Hargrove and Orey Fidani find themselves in the bottom half of the championship standings.

But that doesn’t necessarily mean they’ll stay there. Hargrove – a former Porsche GT3 Cup Challenge Canada by Yokohama Platinum champion and current WeatherTech SportsCar Championship GT Daytona driver – delivered a glimpse of AWA’s strength at Sebring before the team’s misfortune, bringing the car as high as fourth on the leaderboard.

“Those ones are tough,” said Wojteczko. “You can see the performance is there, the pace is there, the strategy’s coming together. Everybody’s done their job and it’s one of those B factors, it’s not really something that’s within our control. When I come home and reflect on these events, I feel like we can hold our head high that everybody really did execute well. I think they say that’s racing, right?”

As someone who’s been in the industry for nearly 15 years, racing is something Wojteczko understands. After transitioning from a driver to a team engineer, Wojteczko worked on crews from the Canadian Touring Car Championship to GT3 Cup Canada and the Pilot Challenge. In 2014, he teamed up with Anthony Mantella to manage Mantella Autosport through 2017.

It was after the 2017 season when Mantella withdrew from motorsports that Wojteczko formed Ontario-based AWA.

The team this season, however, has quite a different look from its rookie year. It was Martin Barkey and Brett Sandberg behind the wheel of a Ford Mustang GT4, a program that Wojteczko is still grateful for.

“My business is a customer racing business, so we are really privileged to support whatever brand our clients want to campaign,” Wojteczko explained. “For Martin Barkey and MBRP, the Mustang was a really good fit and turned out to be an exceptional platform with really good support. I’ve got to be really thankful for everything that Multimatic did for us last year from parts support to technical support. They were really helpful and were a great partner to work with in that regard.

“The move to Porsche this year was really driven by our new drivers and that was the direction they wanted to go. I’m excited to be back with Porsche – not to mention my very first racecar that I competed in and that my dad and I built together was a 944 Turbo. Porsche has been involved in our racing career from the beginning. It’s exciting to work with a new platform, the Cayman is a beautiful car. I think we’re going to see some good success with it as the season goes on.”

That potential success may also come with time to learn the new car. After teams received the new Porsche 718 Cayman GT4 Clubsport at the Roar Before the Rolex 24 during the first weekend of January, AWA and others didn’t have much turnaround time before the season opener three weeks later.

However, the downtime between Daytona and Sebring allowed for extensive development that AWA sees is already paying off.

“The Cayman was received very late at the Roar and straight into it, so we didn’t have the opportunity to do the characterization that we would normally do at the shop,” said Wojteczko. “We got that back after Daytona and did full measurements on the car, kinematic analysis, a bunch of time on the dyno, just really getting to understand and know what we’re working with.

“That seems to really have paid dividends coming out of Sebring. The drivers are really happy with the car and felt like they had a car that could race hard. I think that showed with Scott driving it up towards the front there. I think we can carry that forward into Mid-Ohio (Sports Car Course next month). It’s a tight technical track, I think it will suit the Cayman well.”

While Hargrove has racing experience at Mid-Ohio, it’ll be a new track for Fidani, who is embarking on his rookie season in the Pilot Challenge, yet owns the 2015 GT3 Cup Canada Gold championship. Fidani’s ties to WeatherTech Championship and Canadian team Pfaff Motorsports has allowed for additional support towards AWA’s efforts in 2019.

“I’m really grateful to Pfaff and Steve Bortolotti, in particular, for the opportunity to campaign Orey’s program this year,” said Wojteczko. “We do have crew that also works with the No. 9 car, so it’s a really cool opportunity for us to work together. Working with Orey has been awesome and we’re really privileged to have a customer program like that.”

The partnership sheds light on another, more recent trend – the increasing participation of Canadian teams across multiple IMSA-sanctioned series. As Wojteczko describes, it’s a tip of the hat to Canadians’ love of sports cars.

“It’s harder to run a team here,” he said. “We deal with a lot of challenges, but for some reason, a bunch of us are doing it. Maybe it’s partly cultural, that we’re passionate about sports car racing, especially here and maybe that’s part of the drive. It’s really cool and it’s neat to see so much participation from our hometown.”

Lead photo by the one and only Jordan Lenssen, story by jennifer Klein.